Home > Resources > National, regional, and state-level all-cause and cause-specific under-5 mortality in India in 2000–15: a systematic analysis with implications for the Sustainable Development Goals 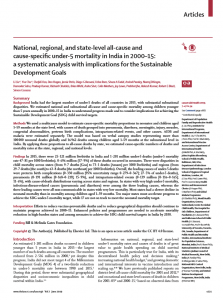 India had the largest number of under-5 deaths of all countries in 2015, with substantial subnational disparities. We estimated national and subnational all-cause and cause-specific mortality among children younger than 5 years annually in 2000–15 in India to understand progress made and to consider implications for achieving the Sustainable Development Goal (SDG) child survival targets.

We used a multicause model to estimate cause-specific mortality proportions in neonates and children aged 1–59 months at the state level, with causes of death grouped into pneumonia, diarrhoea, meningitis, injury, measles, congenital abnormalities, preterm birth complications, intrapartum-related events, and other causes. AIDS and malaria were estimated separately. The model was based on verbal autopsy studies representing more than 100 000 neonatal deaths globally and 16 962 deaths among children aged 1–59 months at the subnational level in India. By applying these proportions to all-cause deaths by state, we estimated cause-specific numbers of deaths and mortality rates at the state, regional, and national levels.

In 2015, there were 25·121 million livebirths in India and 1·201 million under-5 deaths (under-5 mortality rate 47·81 per 1000 livebirths). 0·696 million (57·9%) of these deaths occurred in neonates. There were disparities in child mortality across states (from 9·7 deaths [Goa] to 73·1 deaths [Assam] per 1000 livebirths) and regions (from 29·7 deaths [the south] to 63·8 deaths [the northeast] per 1000 livebirths). Overall, the leading causes of under-5 deaths were preterm birth complications (0·330 million [95% uncertainty range 0·279–0·367]; 27·5% of under-5 deaths), pneumonia (0·191 million [0·168–0·219]; 15·9%), and intrapartum-related events (0·139 million [0·116–0·165]; 11·6%), with cause-of-death distributions varying across states and regions. In states with very high under-5 mortality, infectious-disease-related causes (pneumonia and diarrhoea) were among the three leading causes, whereas the three leading causes were all non-communicable in states with very low mortality. Most states had a slower decline in neonatal mortality than in mortality among children aged 1–59 months. Ten major states must accelerate progress to achieve the SDG under-5 mortality target, while 17 are not on track to meet the neonatal mortality target.

Efforts to reduce vaccine-preventable deaths and to reduce geographical disparities should continue to maintain progress achieved in 2000–15. Enhanced policies and programmes are needed to accelerate mortality reduction in high-burden states and among neonates to achieve the SDG child survival targets in India by 2030.