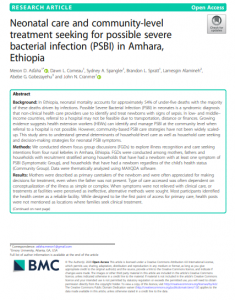 In Ethiopia, neonatal mortality accounts for approximately 54% of under-five deaths with the majority of these deaths driven by infections. Possible Severe Bacterial Infection (PSBI) in neonates is a syndromic diagnosis that non-clinical health care providers use to identify and treat newborns with signs of sepsis. In low- and middle–income countries, referral to a hospital may not be feasible due to transportation, distance or finances. Growing evidence suggests health extension workers (HEWs) can identify and manage PSBI at the community level when referral to a hospital is not possible. However, community-based PSBI care strategies have not been widely scaled-up. This study aims to understand general determinants of household-level care as well as household care seeking and decision-making strategies for neonatal PSBI symptoms.

We conducted eleven focus group discussions (FGDs) to explore illness recognition and care seeking intentions from four rural kebeles in Amhara, Ethiopia. FGDs were conducted among mothers, fathers and households with recruitment stratified among households that have had a newborn with at least one symptom of PSBI (Symptomatic Group), and households that have had a newborn regardless of the child’s health status (Community Group). Data were thematically analyzed using MAXQDA software.

Mothers were described as primary caretakers of the newborn and were often appreciated for making decisions for treatment, even when the father was not present. Type of care accessed was often dependent on conceptualization of the illness as simple or complex. When symptoms were not relieved with clinical care, or treatments at facilities were perceived as ineffective, alternative methods were sought. Most participants identified the health center as a reliable facility. While designed to be the first point of access for primary care, health posts were not mentioned as locations where families seek clinical treatment.

This study describes socio-contextual drivers for PSBI treatment at the community level. Future programming should consider the role community members have in planning interventions to increase demand for neonatal care at primary facilities. Encouragement of health post utilization could further allow for heightened accessibility-acceptability of a simplified PSBI regimen.