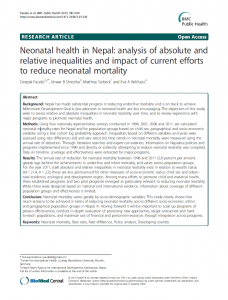 Background: Nepal has made substantial progress in reducing under-five mortality and is on track to achieve Millennium Development Goal 4, but advances in neonatal health are less encouraging. The objectives of this studywere to assess relative and absolute inequalities in neonatal mortality over time, and to review experience with major programs to promote neonatal health.

Methods: Using four nationally representative surveys conducted in 1996, 2001, 2006 and 2011, we calculated neonatal mortality rates for Nepal and for population groups based on child sex, geographical and socio-economic variables using a true cohort log probability approach. Inequalities based on different variables and years were assessed using rate differences (rd) and rate ratios (rr); time trends in neonatal mortality were measured using the annual rate of reduction. Through literature searches and expert consultation, information on Nepalese policies and programs implemented since 1990 and directly or indirectly attempting to reduce neonatal mortality was compiled. Data on timeline, coverage and effectiveness were extracted for major programs.Results: The annual rate of reduction

Results: The annual rate of reduction for neonatal mortality between 1996 and 2011 (2.8 percent per annum) greatly lags behind the achievements in under-five and infant mortality, and varies across population groups. For the year 2011, stark absolute and relative inequalities in neonatal mortality exist in relation to wealth status (rd = 21.4, rr = 2.2); these are less pronounced for other measures of socio-economic status, child sex and urban–rural residence, ecological and development region. Among many efforts to promote child and maternal health, three established programs and two pilot programs emerged as particularly relevant to reducing neonatal mortality. While these were designed based on national and international evidence, information about coverage of different population groups and effectiveness is limited.Conclusion: Neonatal mortality varies greatly by socio-demographic variables. This study clearly shows that

Conclusion: Neonatal mortality varies greatly by socio-demographic variables. This study clearly shows that much remains to be achieved in terms of reducing neonatal mortality across different socio-economic, ethnic and geographical population groups in Nepal. In moving forward it will be important to scale up programs of proven effectiveness, conduct in-depth evaluation of promising new approaches, target unreached and hardto- reach populations, and maximize use of financial and personnel resources through integration across programs.