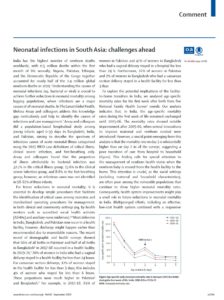 View Resource
India has the highest number of newborn deaths worldwide, with 0·5 million deaths within the first month of life annually; Nigeria, Pakistan, Ethiopia, and the Democratic Republic of the Congo together accounted for nearly half of the 2·4 million global newborn deaths in 2019. Understanding the causes of neonatal infections (eg, bacterial or viral) is crucial to achieve further reductions in neonatal mortality among lagging populations, where infections are a major causes of all neonatal deaths. In The Lancet Global Health, Melissa Arvay and colleagues address this knowledge gap meticulously and help to identify the causes of infections and case management. Arvay and colleagues did a population-based longitudinal study among young infants aged 0–59 days in Bangladesh, India, and Pakistan, aiming to describe the spectrum of infectious causes of acute neonatal illness categorised using the 2015 WHO case definitions of critical illness, clinical severe infection, and fast-breathing only. Arvay and colleagues found that the proportion of illness attributable to bacterial infection was 32·7% in the critical illness group, 15·6% in the clinical severe infection group, and 8·8% in the fast-breathing group; however, an infectious cause was not identified in 58–82% of these infants.
For future reductions in neonatal mortality, it is essential to develop simple procedures that facilitate the identification of critical cases among neonates and standardised operating procedures for management, in both clinical and community settings (eg, by health workers such as accredited social health activists [ASHAs] and auxiliary nurse midwives). Most deliveries in India, Bangladesh, and Pakistan now occur in a health facility; however, discharge might happen earlier than recommended due to unavoidable reasons. The recent round of demographic and health surveys showed that 66% of all births in Pakistan and half of all births in Bangladesh in 2017–18 occurred in a health facility. In 2019–21, 20% of women in India who had a vaginal delivery stayed in a health facility for less than 24 hours. For caesarean section deliverys, 12% of women stayed in the health facility for less than 3 days; this includes 4% of women who stayed for less than 6 hours. These proportions were much higher in Pakistan and Bangladesh. For example, in 2017–18, 84% of women in Pakistan and 41% of women in Bangladesh who had a vaginal delivery stayed in a hospital for less than 24 h. Furthermore, 26% of women in Pakistan and 2% of women in Bangladesh who had a caesarean section delivery stayed in a health facility for less than 3 days.