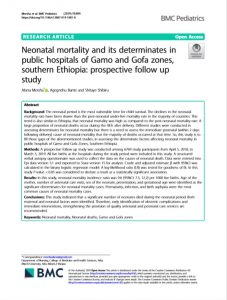 A prospective follow up study was conducted among 6769 study participants from April 5, 2018, to March 5, 2019. All live births at the hospitals during the study period were included in this study. A structured verbal autopsy questionnaire was used to collect the data on the causes of neonatal death. Data were entered into Epi data version 3.1 and exported to Stata version 15 for analysis. Crude and adjusted estimate β with 95%CI was calculated in the binary logistic regression model. A log-likelihood ratio (LR) was tested for goodness of fit. In this study P-value < 0.05 was considered to declare a result as a statistically significant association.

This study indicated that a significant number of neonates died during the neonatal period. Both maternal and neonatal factors were identified. Therefore, early identification of obstetric complications and immediate interventions, strengthening the provision of quality antenatal and postnatal care services are recommended.