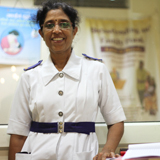 In India, more than one million babies die in their first month of life. Rekha Samant is a senior staff nurse in the Neonatal Intensive Care Unit at King Edward Medical Hospital and Seth Gordhandas Sunderdas Medical College in the megacity of Mumbai. With 15 years experience as a senior staff nurse she is also one of a rare breed of nurses: she has a one-year diploma in neonatal nursing, which she obtained at SNDT University in Mumbai. Samant is a national trainer in Kangaroo Mother Care (KMC) and the KMC Unit at her hospital is internationally recognised as a centre of excellence.
“Rekha is an intelligent, sincere, passionate and extremely dependable nurse who has excellent acumen in the management of newborn babies,” said a colleague, who nominated her for the award. “She deserves the lion’s share of the credit for successfully addressing the needs of newborns in the hospital’s neonatal unit.”
Despite the fact that nurses provide the majority of care to sick newborns in health facilities, there are very few nurses like Rekha Samant who dedicate themselves to newborn care, which is a major chalenge for neonatal units worldwide. There is an acute shortage of neonatal nurses internationally and particular in resource-limited countries where there is a desperate need for accredited training in advanced neonatal nursing practice.
This award was also created to highlight the fact that skilled nursing care is critical to the reduction of the global neonatal death toll of 3.6 million newborns a year. Meeting the global Millennium Development Goal (MDG) 4 for child survival will be increasingly determined by how well countries can reduce newborn deaths, as now more than 40 percent of under-five deaths globally occur in the first month of life.