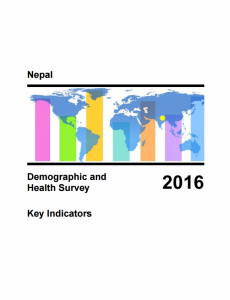 Maternal health indicators have also improved. Antenatal care from a skilled provider increased to 84 percent from 58 percent in 2011, and nearly 70 percent received four or more antenatal care visits. Similarly, delivery by a skilled provider increased more than 1.5-fold, from 36 percent in 2011 to 58 percent in 2016. Although use of modern family planning methods is stagnant at 43 percent, the total fertility rate (TFR) is 2.3 per woman, a decline of 0.3 births from 2011.

Overall, the results show an encouraging trend toward meeting the SDGs targets.