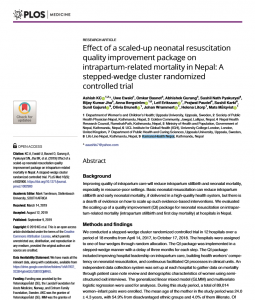 We conducted a stepped-wedge cluster randomized controlled trial in 12 hospitals over a period of 18 months from April 14, 2017, to October 17, 2018. The hospitals were assigned to one of four wedges through random allocation. The QI package was implemented in a stepped-wedge manner with a delay of three months for each step. The QI package included improving hospital leadership on intrapartum care, building health workers’ competency on neonatal resuscitation, and continuous facilitated QI processes in clinical units. An independent data collection system was set up at each hospital to gather data on mortality through patient case note review and demographic characteristics of women using semi-structured exit interviews. The generalized linear mixed model (GLMM) and multivariate logistic regression were used for analyses.

These results suggest scaled-up implementation of a QI package for neonatal resuscitation can reduce intrapartum-related mortality and improve clinical care. The QI intervention package is likely to be effective in similar settings. More implementation research is required to assess the sustainability of QI interventions and quality of care.