Home > Resources > Never Forgotten – The situation of stillbirth around the globe 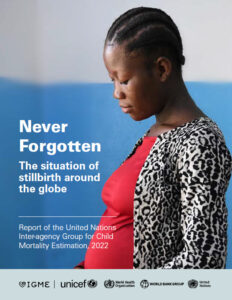 Every day in 2021, over 5,000 babies were stillborn at 28 weeks or more of gestation. That’s a staggering 1.9 million babies stillborn in just one year. Two in five of these babies died during labour – what is known as intrapartum stillbirth. The estimates in this publication, the second report to address stillbirth by the United Nations Inter-agency Group for Child Mortality Estimation (UN IGME), are derived from the most up-to-date data from 195 countries and provide a picture of late gestation stillbirth, or deaths that occur at 28 weeks or more of gestation. They highlight the immense and continued annual burden of stillbirths and the women in the world at greatest risk of having a stillbirth. They also call attention to the fact that when pregnant women have access to quality care, most stillbirths can be prevented.

In 2021, an estimated 1.9 million babies were stillborn at 28 weeks of pregnancy or later, with a global stillbirth rate of 13.9 stillbirths per 1,000 total births. These losses, however, are not experienced uniformly. The report reveals huge differences in stillbirth rates across the globe, with a risk that is 20 times higher in the country with the highest stillbirth rate compared to the country with the lowest stillbirth rate. Stillbirths were concentrated in a few countries, with the greatest number found in India, followed by Pakistan, Nigeria, the Democratic Republic of the Congo, Ethiopia and Bangladesh. These six countries accounted for almost half of the estimated global number of stillbirths and 36 per cent of global live births in 2021.

The unequal burden of stillbirths is also observed within countries, as access to health care, maternal education and other socioeconomic factors differs. For example, in high- and low-income countries alike, higher stillbirths rates are reported in rural areas than in urban areas. These wide discrepancies reiterate the need for all countries to take action and understand who carries the heaviest burden so that we can end preventable stillbirths for all women and families.

Huge inequities in stillbirth rates exist across the globe, with a risk that is up to 20 times higher in the worst affected countries