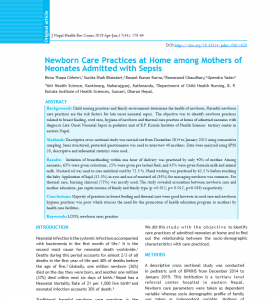 Initiation of breastfeeding within one hour of delivery was practiced by only 40% of mother. Among neonates, 65% were given colostrum, 25% were given pre lacteal feed, and 45% were given formula milk and animal milk. Mustard oil was used to care umbilical cord by 72.5 %. Hand washing was practiced by 62.5 % before touching the baby. Application of kajal (52.5%) in eyes and use of mustard oil (95%) for massaging newborn was common. For thermal care, burning charcoal (75%) was mostly used. The study revealed association between newborn care and mother education, per capita income of family and family type (p =0.012, p= 0.012, p=0.039) respectively.

Majority of practices in breast feeding and thermal care were good however in cord care and newborn hygiene practices was poor which stresses the need for the promotion of health education program to mothers by health care facilities.