Home > Resources > Newborn survival in Nepal: a decade of change and future implications 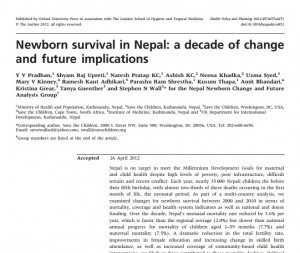 Nepal is on target to meet the Millennium Development Goals for maternal and child health despite high levels of poverty, poor infrastructure, difficult terrain and recent conflict. Each year, nearly 35 000 Nepali children die before their fifth birthday, with almost two-thirds of these deaths occurring in the first month of life, the neonatal period. As part of a multi-country analysis, we examined changes for newborn survival between 2000 and 2010 in terms of mortality, coverage and health system indicators as well as national and donor funding. Over the decade, Nepal’s neonatal mortality rate reduced by 3.6% per year, which is faster than the regional average (2.0%) but slower than national annual progress for mortality of children aged 1–59 months (7.7%) and maternal mortality (7.5%). A dramatic reduction in the total fertility rate, improvements in female education and increasing change in skilled birth attendance, as well as increased coverage of community-based child health interventions, are likely to have contributed to these mortality declines. Political commitment and support for newborn survival has been generated through strategic use of global and national data and effective partnerships using primarily a selective newborn-focused approach for advocacy and planning. Nepal was the first low-income country to have a national newborn strategy, influencing similar strategies in other countries. The Community-Based Newborn Care Package is delivered through the nationally available Female Community Health Volunteers and was piloted in 10 of 75 districts, with plans to increase to 35 districts in mid-2013. Innovation and scale up, especially of community-based packages, and public health interventions and commodities appear to move relatively rapidly in Nepal compared with some other countries. Much remains to be done to achieve high rates of effective coverage of community care, and especially to improve the quality of facility-based care given the rapid shift to births in facilities.