Home > Resources > Not just a number: examining coverage and content of antenatal care in low-income and middle-income countries 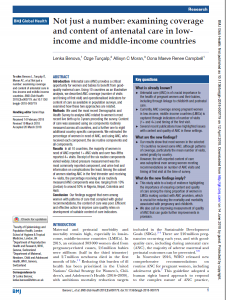 Maternal and perinatal morbidity and mortality remain high, especially in low-income, middle-income countries (LMICs). In 2015, an estimated 303 000 women died from pregnancy-related causes, 2.6 million babies were stillborn (half in the third trimester) and 2.7 million newborns died in the first month of life. Reducing this burden of ill health has been prioritised in the United Nations’ Global Strategy for Women’s, Children’s, and Adolescent’s Health (2016–2030), with ambitious mortality reduction targets included in the Sustainable Development Goals (SDGs). There are 210 million pregnancies occurring each year, and with goodquality care, including during antenatal care (ANC), the majority of adverse maternal and perinatal outcomes can be prevented. In November 2016, WHO released new comprehensive recommendations on routine ANC for pregnant women, including adolescent girls. This guideline adopted a human rights based approach to respond to the complex nature of ANC practice, organisation and delivery within diverse health systems. It focused on person-centred care and well-being, and aimed to prevent death and ill-health. This ANC guideline includes 49 recommendations: 14 nutritional interventions,8 maternal and fetal assessments, 5 preventive measures, 6 interventions for common physiological symptoms, 6 health systems interventions and 10 routine recommendations from other WHO guidelines.7 Further, the new guideline recommends eight ANC contacts, with the first contact in the first trimester (up to 12 weeks of gestation) and increased contacts (five) during the third trimester, the time of highest risk for major maternal complications such as pre-eclampsia/eclampsia. Routine ANC has universal components applicable to every woman, but overall the recommendations are designed to be adaptable so that countries with different burdens of disease, social and economic situations, and health system structures can implement the recommendations based on their context and their populations’ needs. Five of the 49 recommendations only apply in a research context.

ANC coverage can be estimated via routine health information systems, but in LMICs, it is predominately captured via population-based surveys such as the Demographic and Health Surveys (DHS) and Multiple Indicator Cluster Survey. Global monitoring of the Millennium Development Goals (MDGs) included indicators on the number of ANC visits (1+ and 4+). Coverage of 4+ ANC visits is also 1 of 12 core maternal health indicators for global monitoring and reporting for the SDGs. However, the number of visits does not provide information on the content of care received in these visits, and was identified as a priority area for indicator development. Hodgins and D’Agostino (2014) pointed out that these coverage indicators capture contacts with care providers; instead they called for indicators of effective ANC coverage, by focusing on the content of care received, in order to begin to capture quality of care, an approach conceptually endorsed by Ng and colleagues. The 2016 WHO guideline also emphasises the importance of quality of care during each contact, highlighting components of essential content of high-quality care. There is a need to develop monitoring indicators which focus on the content of ANC as part of quality of care.

The objective of our study is to: (1) Describe ANC coverage using the MDG-era indicators of number of visits (1+ and 4+) in selected countries. (2) Operationalise and examine and timing of the first visit and indicators for content of care based on WHO ANC guidelines, as available in multicountry DHS. (3) Examine the extent to which these measures relate to the MDG-era ANC indicators.