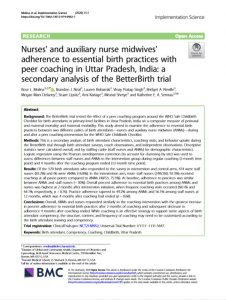 The BetterBirth trial tested the effect of a peer coaching program around the WHO Safe Childbirth Checklist for birth attendants in primary-level facilities in Uttar Pradesh, India on a composite measure of perinatal and maternal mortality and maternal morbidity. This study aimed to examine the adherence to essential birth practices between two different cadres of birth attendants—nurses and auxiliary nurse midwives (ANMs)—during and after a peer coaching intervention for the WHO Safe Childbirth Checklist.

This is a secondary analysis of birth attendant characteristics, coaching visits, and behavior uptake during the BetterBirth trial through birth attendant surveys, coach observations, and independent observations. Descriptive statistics were calculated overall, and by staffing cadre (staff nurses and ANMs) for demographic characteristics. Logistic regression using the Pearson overdispersion correction (to account for clustering by site) was used to assess differences between staff nurses and ANMs in the intervention group during regular coaching (2-month time point) and 4 months after the coaching program ended (12-month time point).

Overall, ANMs and nurses responded similarly to the coaching intervention with the greatest increase in percent adherence to essential birth practices after 2 months of coaching and subsequent decrease in adherence 4 months after coaching ended. While coaching is an effective strategy to support some aspects of birth attendant competency, the structure, content, and frequency of coaching may need to be customized according to the birth attendant training and competency.