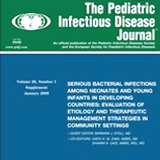 Introduction: Knowledge of pathogens causing infections in young infants (up to 90 days of life) is essential for devising community-based management strategies. Most etiological data from developing countries are hospital-based and may have little relevance to communities in which most babies are born at home.

Results: Of 63 studies, 13 focused on community-acquired infections, but limited data were available from home-born neonates. In the first week of life (3209 isolates), Klebsiella species (25%), Escherichia coli (15%), and Staphylococcus aureus (18%) were major pathogens. Group B streptococci (GBS) were relatively uncommon (7%), although regional differences existed. After the first week of life (835 isolates), S. aureus (14%), GBS (12%), Streptococcus pneumoniae (12%), and nontyphoidal Salmonella species (13%) were most frequent. S. pneumoniae (27%) was most common in the postneonatal period (among 141 isolates). Gram-negatives predominated (77%) among home-delivered babies (among 170 isolates).

Conclusions: Limited information is available on etiology of serious bacterial infections in community settings. Hospital-based studies suggest that most infections in the first week of life are due to Gram-negative pathogens, and many may be environmentally rather than maternally-acquired, owing to unhygienic delivery practices. Such practices may also explain the predominance of Gram-negative infections among home-born infants, although data from home settings are limited. These findings have implications for developing prevention and management strategies in communities and hospitals.