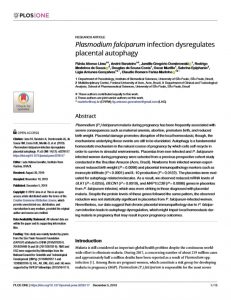 Plasmodium (P.) falciparum malaria during pregnancy has been frequently associated with severe consequences such as maternal anemia, abortion, premature birth, and reduced birth weight. Placental damage promotes disruption of the local homeostasis; though, the mechanisms underlying these events are still to be elucidated. Autophagy is a fundamental homeostatic mechanism in the natural course of pregnancy by which cells self-recycle in order to survive in stressful environments.

Placentas from non-infected and P. falciparum-infected women during pregnancy were selected from a previous prospective cohort study conducted in the Brazilian Amazon (Acre, Brazil). Newborns from infected women experienced reduced birth weight (P = 0.0098) and placental immunopathology markers such as monocyte infiltrate (P < 0.0001) and IL-10 production (P = 0.0122). The placentas were evaluated for autophagy-related molecules.

As a result, we observed reduced mRNA levels of ULK1 (P = 0.0255), BECN1 (P = 0.0019), and MAP1LC3B (P = 0.0086) genes in placentas from P. falciparum-infected, which was more striking in those diagnosed with placental malaria. Despite the protein levels of these genes followed the same pattern, the observed reduction was not statistically significant in placentas from P. falciparum-infected women.

Nevertheless, our data suggest that chronic placental immunopathology due to P. falciparum infection leads to autophagy dysregulation, which might impair local homeostasis during malaria in pregnancy that may result in poor pregnancy outcomes.