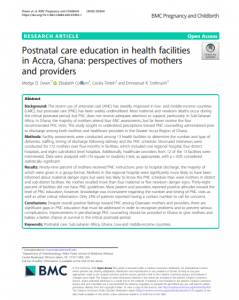 The recent use of antenatal care (ANC) has steadily improved in low- and middle-income countries (LMIC), but postnatal care (PNC) has been widely underutilized. Most maternal and newborn deaths occur during the critical postnatal period, but PNC does not receive adequate attention or support, particularly in Sub-Saharan Africa. In Ghana, the majority of mothers attend four ANC assessments, but far fewer receive the four recommended PNC visits. This study sought to understand perceptions toward PNC counselling administered prior to discharge among both mothers and healthcare providers in the Greater Accra Region of Ghana.

Facility assessments were conducted among 13 health facilities to determine the number and type of deliveries, staffing, timing of discharge following delivery and the PNC schedule. Structured interviews were conducted for 172 mothers over four-months in facilities, which included one regional hospital, four district hospitals, and eight sub-district level hospitals. Additionally, healthcare providers from 12 of the 13 facilities were interviewed. Data were analyzed with Chi-square or students t-test, as appropriate, with p < 0.05 considered statistically significant.

Ninety-nine percent of mothers received PNC instructions prior to hospital discharge, the majority of which were given in a group format. Mothers in the regional hospital were significantly more likely to have been informed about maternal danger signs but were less likely to know the PNC schedule than were mothers in district and sub-district facilities. No mother recalled more than four maternal or five newborn danger signs. Thirty-eight percent of facilities did not have PNC guidelines. Most patient and providers reported positive attitudes toward the level of PNC education, however, knowledge was inconsistent regarding the number and timing of PNC visits as well as other critical information. Only 23% of patients reported having a contact number to call for concerns.