Home > Resources > Postnatal care for newborns in Bangladesh: The importance of health–related factors and location 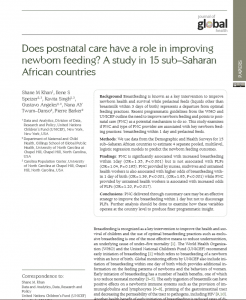 Using data from the Bangladesh Maternal Mortality Survey (BMMS) 2010 we conducted logistic regression analysis to understand what socio–economic and health–related factors were associated with early postnatal care (PNC) by day 2 and PNC by day 7. Key variables studied were maternal complications (during pregnancy, delivery or after delivery) and contact with the health care system (receipt of any antenatal care, place of delivery and type of delivery attendant). Using data from the BMMS 2010 and an Emergency Obstetric and Neonatal Care (EmONC) 2012 needs assessment, we also presented descriptive maps of PNC coverage overlaid with neonatal mortality rates.

There were several significant findings from the regression analysis. Newborns of mothers having a skilled delivery were significantly more likely to receive PNC (Day 7: OR = 2.16, 95% confidence interval (CI) 1.81, 2.58; Day 2: OR = 2.11, 95% CI 1.76). Newborns of mothers who reported a complication were also significantly more likely to receive PNC with odds ratios varying between 1.3 and 1.6 for complications at the different points along the continuum of care. Urban residence and greater wealth were also significantly associated with PNC. The maps provided visual images of wide variation in PNC coverage and indicated that districts with the highest PNC coverage, did not necessarily have the lowest neonatal mortality rates.

Newborns of mothers who had a skilled delivery or who experienced a complication were more likely to receive PNC than newborns of mothers with a home delivery or who did not report a complication. Given that the majority of women in Bangladesh have a home delivery, strategies are needed to reach their newborns with PNC. Greater focus is also needed to reach poor women in rural areas. Engaging community health workers to conduct home PNC visits may be an interim strategy as Bangladesh strives to increase skilled delivery coverage.