Home > Resources > Postnatal depression and its association with adverse infant health outcomes in low- and middle-income countries: a systematic review and meta-analysis 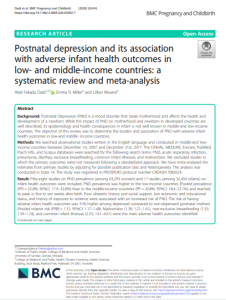 Postnatal Depression (PND) is a mood disorder that steals motherhood and affects the health and development of a newborn. While the impact of PND on motherhood and newborn in developed countries are well described, its epidemiology and health consequences in infant is not well known in middle-and low-income countries. The objective of this review was to determine the burden and association of PND with adverse infant health outcomes in low-and middle- income countries.

We searched observational studies written in the English language and conducted in middle-and low-income countries between December 1st, 2007, and December 31st, 2017. The CINHAL, MEDLINE, Emcare, PubMed, Psych Info, and Scopus databases were searched for the following search terms: PND, acute respiratory infection, pneumonia, diarrhea, exclusive breastfeeding, common infant illnesses, and malnutrition. We excluded studies in which the primary outcomes were not measured following a standardized approach. We have meta-analyzed the estimates from primary studies by adjusting for possible publication bias and heterogeneity. The analysis was conducted in Stata 14. The study was registered in PROSPERO protocol number CRD42017082624.