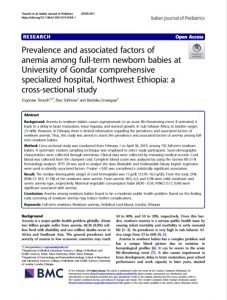 Anemia in newborn babies causes asymptomatic to an acute life-threatening event. If untreated, it leads to a delay in brain maturation, tissue hypoxia, and stunted growth. In Sub-Saharan Africa, its burden ranges 23–66%. However, in Ethiopia, there is limited information regarding the prevalence and associated factors of newborn anemia. Thus, this study was aimed to assess the prevalence and associated factors of anemia among full-term newborn babies.

Anemia among newborn babies found to be a moderate public health problem. Based on the finding early screening of newborn anemia may reduce further complications.