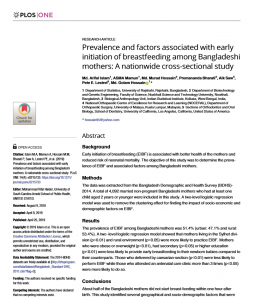 Early initiation of breastfeeding (EIBF) is associated with better health of the mothers and reduced risk of neonatal mortality. The objective of this study was to determine the prevalence of EIBF and associated factors among Bangladeshi mothers.

The data was extracted from the Bangladesh Demographic and Health Survey (BDHS)-2014. A total of 4,092 married non-pregnant Bangladeshi mothers who had at least one child aged 2 years or younger were included in this study. A two-level logistic regression model was used to remove the clustering effect for finding the impact of socio-economic and demographic factors on EIBF.

The prevalence of EIBF among Bangladeshi mothers was 51.4% (urban: 47.1% and rural: 53.4%). A two -level logistic regression model showed that mothers living in the Sylhet division (p<0.01) and rural environment (p<0.05) were more likely to practice EIBF. Mothers who were obese or overweight (p<0.01), had secondary (p<0.05) or higher education (p<0.01) were less likely to provide early breastfeeding to their newborn babies compared to their counterparts. Those who delivered by caesarian-section (p<0.01) were less likely to perform EIBF while those who attended an antenatal care clinic more than 3 times (p<0.05) were more likely to do so.

About half of the Bangladeshi mothers did not start breast-feeding within one hour after birth. This study identified several geographical and socio-demographic factors that were associated with EIBF, and hope that this information will help the government to focus their resources to promote early breastfeeding.