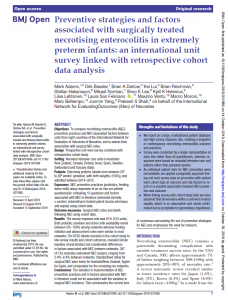 To compare necrotizing enterocolitis (NEC) prevention practices and NEC associated factors between units from eight countries of the International Network for Evaluation of Outcomes of Neonates, and to assess their association with surgical NEC rates.

The survey response rate was 91% (153 units). Both probiotic provision and donor milk availability varied between 0%–100% among networks whereas feeding initiation and advancement rates were similar in most networks. The 9792 infants included in the cohort study to link survey results and cohort outcomes, revealed similar baseline characteristics but considerable differences in factors associated with NEC between networks. 397 (4.1%) neonates underwent NEC surgery, ranging from 2.4%–8.4% between networks. Standardised ratios for surgical NEC were lower for Australia/New Zealand, higher for Spain, and comparable for the remaining six networks.

The variation in implementation of NEC prevention practices and in factors associated with NEC in literature could not be associated with the variation in surgical NEC incidence. This corroborates the current lack of consensus surrounding the use of preventive strategies for NEC and emphasises the need for research.