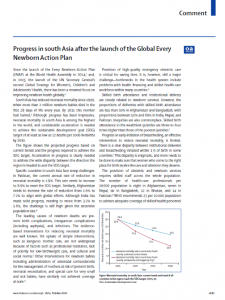 Since the launch of the Every Newborn Action Plan (ENAP) at the World Health Assembly in 2014,and, in 2015, the launch of the UN Secretary General’s second Global Strategy for Women’s, Children’s and Adolescents’ Health, there has been a renewed focus on improving newborn health globally.

South Asia has reduced neonatal mortality since 1990, when more than 2 million newborn babies died in the first 28 days of life every year. By 2015 this number had halved.Although progress has been impressive, neonatal mortality in south Asia is among the highest in the world, and considerable acceleration is needed to achieve the sustainable development goal (SDG) target of at least as low as 12 deaths per 1000 livebirths by 2030.