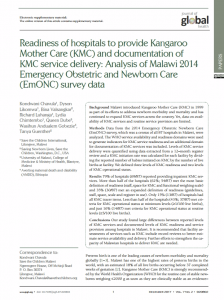 Background Malawi introduced Kangaroo Mother Care (KMC) in 1999 as part of its efforts to address newborn morbidity and mortality and has continued to expand KMC services across the country. Yet, data on availability of KMC services and routine service provision are limited.

Methods Data from the 2014 Emergency Obstetric Newborn Care (EmONC) survey, which was a census of all 87 hospitals in Malawi, were analyzed. The WHO service availability and readiness domains were used to generate indicators for KMC service readiness and an additional domain for documentation of KMC services was included. Levels of KMC service delivery were quantified using data extracted from a 12–month register review and a KMC initiation rate was calculated for each facility by dividing the reported number of babies initiated on KMC by the number of live births at facility. We defined three levels of KMC readiness and two levels of KMC operational status.

Conclusions Our study found large differences between reported levels of KMC services and documented levels of KMC readiness and service provision among hospitals in Malawi. It is recommended that facility assessments of services such as KMC include record reviews to better estimate service availability and delivery. Further efforts to strengthen the capacity of Malawian hospitals to deliver KMC are needed.