Home > Resources > Relationship between Caesarean section and breastfeeding: evidence from the 2013 Turkey demographic and health survey 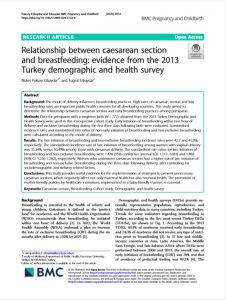 This study provides useful evidence for the implementation of strategies to prevent unnecessary caesarean sections, which negatively affect not only maternal health but also neonatal health. The promotion of mother-friendly policies by healthcare institutions, implemented in a baby-friendly manner, is essential.