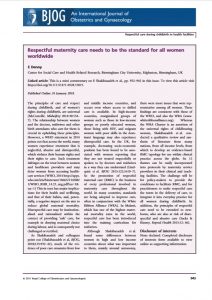 The principles of care and respect during childbirth, and of women’s rights during childbirth, are universal (McConville. Midwifery 2014:30:154–7). The relationship between women and the doctors, midwives and other birth attendants who care for them is crucial in upholding these principles. However, a WHO statement in 2014 points out that across the world, many women experience treatment that is neglectful, abusive and disrespectful, which violates their human rights and their rights to care. Such treatment infringes on the trust between women and healthcare providers and may deter women from accessing healthcare services (WHO, 2014). This in turn has major implications for their health and wellbeing, and that of their babies, and, potentially, a negative impact on the aim to reduce global maternal mortality. Disrespectful care may be institutionalised and rationalised within the context of providing ‘safe’ care, for example in denying maternal choice during labour, and is consequently not challenged or rectified.

As Shakibazadeh and colleagues point out (Shakibazadeh et al, BJOG, 2018;125:932–42), much of the evidence of poor care emanates from low and middle income countries, and occurs even where access to skilled care is available. In high‐income countries, marginalised groups of women such as those in low‐income groups or poorly educated women, those living with HIV, and migrant women with poor skills in the dominant language may also experience disrespectful care. In the UK, for example, decreasing socio‐economic position has been found to be associated with women reporting that they are not treated respectfully or spoken to by doctors and midwives in a way they can understand (Lindquist et al. BJOG 2015:122:1610–7). So the promotion of respectful maternal care (RMC) is the business of every professional involved in maternity care throughout the world. In many countries, standards are being adopted to improve care, often in conjunction with the White Ribbon Alliance (WRA). In Malawi, which has one of the highest maternal mortality rates in the world, respectful care has been introduced into the training curriculum for midwives.

Although Shakibazadeh et al. found some differences between women in high and low income countries about what was important to them, mainly around autonomy, there were more issues that were representative among all women. These findings are consistent with those of the WHO, and also the White Ribbon Alliance (WRA). Whereas the WRA Charter is an assertion of the universal rights of childbearing women, Shakibazadeh et al. conducted a qualitative review and synthesis of literature from many nations, from all income levels, from which to develop an evidence‐based Respectful Maternity Care (RMC) typology for use within clinical practice across the globe. Its 12 themes can be easily incorporated into protocols by maternity service providers in their clinical and teaching facilities. The challenge will be for policy‐makers to provide the conditions to facilitate RMC, and for practitioners to make respectful care the norm in the delivery of care, to integrate it into everyday practice for all women during childbirth. In addition, the principles of respectful care need to be extended to newborns, who are also at risk of disrespectful and abusive care (Sacks & Kinney. Reprod Health 2015:12: 46).