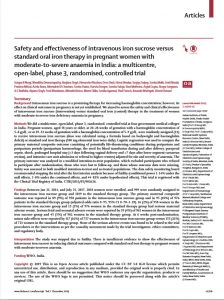 Intravenous iron sucrose is a promising therapy for increasing haemoglobin concentration; however, its effect on clinical outcomes in pregnancy is not yet established. We aimed to assess the safety and clinical effectiveness of intravenous iron sucrose (intervention) versus standard oral iron (control) therapy in the treatment of women with moderate-to-severe iron deficiency anaemia in pregnancy.

We did a multicentre, open-label, phase 3, randomised, controlled trial at four government medical colleges in India. Pregnant women, aged 18 years or older, at 20–28 weeks of gestation with a haemoglobin concentration of 5–8 g/dL, or at 29–32 weeks of gestation with a haemoglobin concentration of 5–9 g/dL, were randomly assigned (1:1) to receive intravenous iron sucrose (dose was calculated using a formula based on bodyweight and haemoglobin deficit) or standard oral iron therapy (100 mg elemental iron twice daily). Logistic regression was used to compare the primary maternal composite outcome consisting of potentially life-threatening conditions during peripartum and postpartum periods (postpartum haemorrhage, the need for blood transfusion during and after delivery, puerperal sepsis, shock, prolonged hospital stay [>3 days following vaginal delivery and >7 days after lower segment caesarean section], and intensive care unit admission or referral to higher centres) adjusted for site and severity of anaemia. The primary outcome was analysed in a modified intention-to-treat population, which excluded participants who refused to participate after randomisation, those who were lost to follow-up, and those whose outcome data were missing. Safety was assessed in both modified intention-to-treat and as-treated populations. The data safety monitoring board recommended stopping the trial after the first interim analysis because of futility (conditional power 1·14% under the null effects, 3·0% under the continued effects, and 44·83% under hypothesised effects). This trial is registered with the Clinical Trial Registry of India, CTRI/2012/05/002626.

The study was stopped due to futility. There is insufficient evidence to show the effectiveness of intravenous iron sucrose in reducing clinical outcomes compared with standard oral iron therapy in pregnant women with moderate-to-severe anaemia.