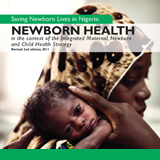 Recent progress has been made towards reducing child mortality but Nigeria is currently off track for Millennium Development Goal (MDG) 4 – a two-thirds reduction in child mortality (on 1990 levels) by 2015. According to UN mortality estimates, Nigeria has achieved only an average of 1.2% reduction in under-five mortality per year since 1990; it needs to achieve an annual reduction rate of 10% from now until 2015 to meet MDG 4 (Figure 1).

While some progress has been made to reduce deaths after the first month of life (the neonatal period), there has been no measurable progress in reducing neonatal deaths over the past decade. About 5.9 million babies are born in Nigeria every year, and nearly one million children die before the age of five years. One quarter of all underfive deaths are newborns – 241,000 babies each year. Many deaths occur at home and are therefore unseen and uncounted in official statistics. Given that the country’s population is the largest in Africa, Nigeria’s failure to make inroads regarding the MDGs significantly influences Sub-Saharan Africa’s achievement of these goals as a whole and contributes disproportionately to global childhood mortality.

In 2009, the first edition of Saving Newborn Lives in Nigeria: Situation Analysis and Action Plan for Newborn Health was produced in order to provide a more comprehensive understanding of newborn survival and health in Nigeria, to analyse the relevant data by state and to present concrete steps to accelerate action to save newborn lives in Nigeria in the context of the Integrated Maternal, Newborn and Child Health (IMNCH) strategy. This second edition of the report includes updated national and state-level data profiles in line with the global Countdown to 2015 for Maternal, Newborn and Child Health process; a new chapter on maternal, newborn and child nutrition; updated recommendations; and a renewed call to action, including letters of commitment from key stakeholders in maternal, newborn and child health in Nigeria.