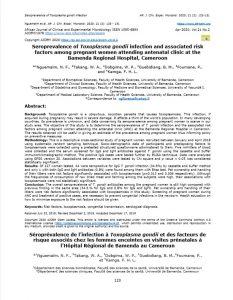 Toxoplasma gondii is a ubiquitous, coccidian parasite that causes toxoplasmosis. This infection, if acquired during pregnancy may result in severe damage. It affects a third of the world’s population. In many developing countries, its prevalence is unknown, and data concerning its seroprevalence among pregnant women is scarce in our study area. The objective of this study is to determine the seroprevalence of T. gondii infection and the associated risk factors among pregnant women attending the antenatal clinic (ANC) at the Bamenda Regional Hospital in Cameroon. The results obtained will be useful in giving an estimate of the prevalence among pregnant women thus informing policy on preventive measures.

This is a descriptive cross-sectional study of pregnant women recruited between January and April 2018 using systematic random sampling technique. Socio-demographic data of participants and predisposing factors to toxoplasmosis were collected using a pretested structured questionnaire administered to them. Five milliliters of blood were collected and the serum screened for IgG and IgM antibodies against T. gondii using the cassette and buffer immunochromatographic method. The positive IgG cases were tested further by ELISA technique. Data were analyzed using SPSS version 20. Associations between variables were tested by Chi square and p value < 0.05 was considered statistically significant.

Of 127 women tested, 44 were seropositive for IgG T. gondii infection 34.6% by cassette and buffer method and only 1 with both IgG and IgM antibodies 0.8 were found among them with Elisa test. Pet ownership and handling of their litters were risk factors significantly associated with toxoplasmosis (p=0.013 and 0.006 respectively). Although the frequencies of consumption of raw dried meat and farming among the subjects were high, their associations with toxoplasmosis were not statistically significant.

The overall seroprevalence of T. gondii antibodies among the pregnant women is still high compared with previous finding in the same area (34.6 % for IgG and 0.8% for IgG and IgM). Pet ownership and handling of their litters were risk factors significantly associated with toxoplasmosis in this study. Screening of pregnant women during ANC and treatment of positive cases, are necessary to prevent congenital infections in the newborn. Health education on how to minimize exposure to the risk factors should be given.