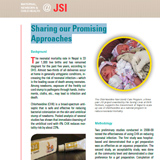 The neonatal mortality rate in Nepal is 33 per 1,000 live births and has remained stagnant for the past five years, according to DHS. Almost two-thirds of all deliveries occur at home in generally unhygienic conditions, increasing the risk of neonatal infection—which is the leading cause of death among neonates.

Among newborns, exposure of the freshly cut cord stump to pathogens through hands, instruments,
cloths, etc., may lead to infection and death.

Chlorhexidine (CHX) is a broad-spectrum antiseptic that is safe and effective for reducing bacterial colonization on the skin and umbilical stump of newborns. Pooled analysis of several studies has shown that immediate cleansing of the umbilical cord with 4% CHX reduces mortality risk by about 23%.