Home > Resources > Survival time and its predictors in preterm infants in the post-discharge neonatal period: a prospective cohort study in Busoga Region, Uganda 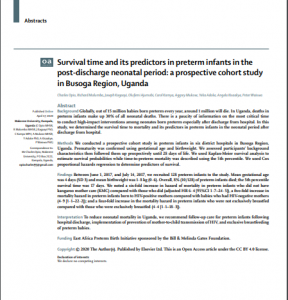 Globally, out of 15 million babies born preterm every year, around 1 million will die. In Uganda, deaths in preterm infants make up 30% of all neonatal deaths. There is a paucity of information on the most critical time to conduct high-impact interventions among neonates born preterm especially after discharge from hospital. In this study, we determined the survival time to mortality and its predictors in preterm infants in the neonatal period after discharge from hospital.

We conducted a prospective cohort study in preterm infants in six district hospitals in Busoga Region, Uganda. Prematurity was confirmed using gestational age and birthweight. We assessed participants’ background characteristics then followed them up prospectively until 28 days of life. We used Kaplan-Meier survival analysis to estimate survival probabilities while time-to-preterm mortality was described using the 5th percentile. We used Cox proportional hazards regression to determine predictors of survival.