Home > Resources > The cost of not breastfeeding: global results from a new tool 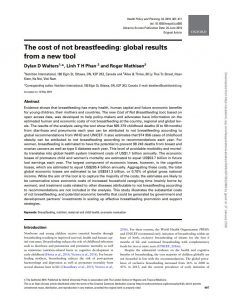 Evidence shows that breastfeeding has many health, human capital and future economic benefits for young children, their mothers and countries. The new Cost of Not Breastfeeding tool, based on open access data, was developed to help policy-makers and advocates have information on the estimated human and economic costs of not breastfeeding at the country, regional and global levels.

While the aim of the tool is to capture the majority of the costs, the estimates are likely to be conservative since economic costs of increased household caregiving time (mainly borne by women), and treatment costs related to other diseases attributable to not breastfeeding according to recommendations are not included in the analysis. This study illustrates the substantial costs of not breastfeeding, and potential economic benefits that could be generated by government and development partners’ investments in scaling up effective breastfeeding promotion and support strategies.