Home > Resources > The crowded space of local accountability for maternal, newborn and child health: a case study of the South African health system 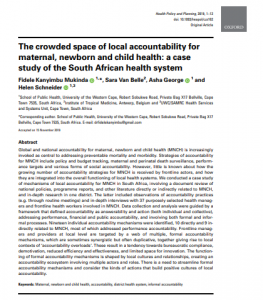 Global and national accountability for maternal, newborn and child health (MNCH) is increasingly invoked as central to addressing preventable mortality and morbidity. Strategies of accountability for MNCH include policy and budget tracking, maternal and perinatal death surveillance, performance targets and various forms of social accountability.

However, little is known about how the growing number of accountability strategies for MNCH is received by frontline actors, and how they are integrated into the overall functioning of local health systems. We conducted a case study of mechanisms of local accountability for MNCH in South Africa, involving a document review of national policies, programme reports, and other literature directly or indirectly related to MNCH, and in-depth research in one district.

The latter included observations of accountability practices (e.g. through routine meetings) and in-depth interviews with 37 purposely selected health managers and frontline health workers involved in MNCH. Data collection and analysis were guided by a framework that defined accountability as answerability and action (both individual and collective), addressing performance, financial and public accountability, and involving both formal and informal processes.