Home > Resources > The effect of report cards on the coverage of maternal and neonatal health care: a factorial, cluster-randomised controlled trial in Uttar Pradesh, India 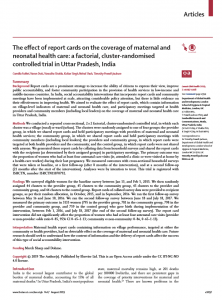 Report cards are a prominent strategy to increase the ability of citizens to express their view, improve public accountability, and foster community participation in the provision of health services in low-income and middle-income countries. In India, social accountability interventions that incorporate report cards and community meetings have been implemented at scale, attracting considerable policy attention, but there is little evidence on their effectiveness in improving health. We aimed to evaluate the effect of report cards, which contain information on village-level indicators of maternal and neonatal health care, and participatory meetings targeted at health providers and community members (including local leaders) on the coverage of maternal and neonatal health care in Uttar Pradesh, India.

We conducted a repeated cross-sectional, 2 × 2 factorial, cluster-randomised controlled trial, in which each cluster was a village (rural) or ward (urban). The clusters were randomly assigned to one of four groups: the provider group, in which we shared report cards and held participatory meetings with providers of maternal and neonatal health services; the community group, in which we shared report cards and held participatory meetings with community members (including local leaders); the providers and community group, in which report cards were targeted at both health providers and the community; and the control group, in which report cards were not shared with anyone. We generated these report cards by collating data from household surveys and shared the report cards with the recipients (as determined by their assigned groups) in participatory meetings. The primary outcome was the proportion of women who had at least four antenatal care visits (ie, attended a clinic or were visited at home by a health-care worker) during their last pregnancy. We measured outcomes with cross-sectional household surveys that were taken at baseline, at a first follow-up (after 8 months of the intervention), and at a second follow-up (21 months after the start of the intervention). Analyses were by intention to treat. This trial is registered with ISRCTN, number ISRCTN11070792.

Maternal health report cards containing information on village performance, targeted at either the community or health providers, had no detectable effect on the coverage of maternal and neonatal health care. Future research should seek to understand how the content of information and the delivery of report cards affect the success of this type of social accountability intervention.