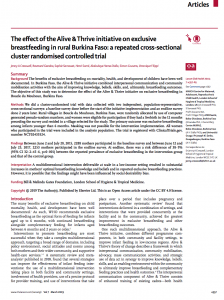 The benefits of exclusive breastfeeding on mortality, health, and development of children have been well documented. In Burkina Faso, the Alive & Thrive initiative combined interpersonal communication and community mobilisation activities with the aim of improving knowledge, beliefs, skills, and, ultimately, breastfeeding outcomes. The objective of this study was to determine the effect of the Alive & Thrive initiative on exclusive breastfeeding in Boucle du Mouhoun, Burkina Faso.

We did a cluster-randomised trial with data collected with two independent, population-representative, cross-sectional surveys: a baseline survey done before the start of the initiative implementation and an endline survey done 2 years later. Rural villages in Boucle du Mouhoun, Burkina Faso, were randomly allocated by use of computer generated pseudo-random numbers, and women were eligible for participation if they had a livebirth in the 12 months preceding the survey and resided in a village selected for the study. The primary outcome was exclusive breastfeeding among infants younger than 6 months. Masking was not possible for the intervention implementation. All women who participated in the trial were included in the analysis population. The trial is registered with ClinicalTrials.gov, number NCT02435524.

A multidimensional intervention deliverable at scale in a low-income setting resulted in substantial increases in mothers’ optimal breastfeeding knowledge and beliefs and in reported exclusive breastfeeding practices. However, it is possible that the findings might have been influenced by social desirability bias.