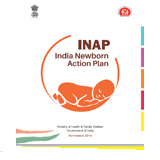 In India, 760,000 newborns die each year mainly due to preventable causes, and policy makers are moving quickly to focus more attention on maternal and newborn health as a top national health priority.

India’s Newborn Action Plan, approved and launched by the national health ministry earlier this month, has been developed in response to the Global Every Newborn Action Plan (ENAP) approved last May at the World Health Assembly. The India plan outlines a targeted strategy for accelerating the reduction of preventable newborn deaths and still births in India.

The plan draws from the latest evidence on effective interventions, which will not only help in reducing the burden of stillbirths and neonatal mortality, but also maternal deaths.

With clearly marked timelines for implementation, monitoring and evaluation, and scaling up of proposed interventions, the plan calls for all stakeholders to work towards improving newborn health in India with the dual goals of dramatically reducing newborn and stillborn death rates by 2030.

The plan is guided by the principles of Integration, Equity, Gender, Quality of Care, Convergence, Accountability and Partnerships. Its strength is built on its six pillars of intervention packages impacting still births and newborn health.

The six pillars include:

India’s triumph over polio has proven that it can reach even the most hard-to-reach and vulnerable children despite demographic, economic, and socio-cultural challenges. While the country has witnessed dramatic reduction in maternal and child mortality rates over the past two decades, the reduction of deaths of babies less than a month old has been much less as compared to deaths of all children under the age of 5. As a result, newborns in 2012 accounted for 56 percent of all deaths of children under 5 as compared to 41% in 1990.

This is a major reason why the government has launched India’s Newborn Action Plan (#INAP). With a clear understanding that almost all of these deaths and subsequent disabilities are preventable, the plan is a concerted effort towards translating these commitments into meaningful change for newborns.