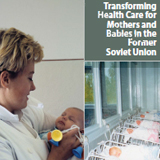 A transformation in maternal and infant health care is spreading steadily through the countries of the former Soviet Union. Outdated, rigid, and highly medicalized practices are being replaced by modern evidence-based and integrated approaches that are more responsive to women and families, achieve better health outcomes and reduce costs. JSI has been a key player in these advances in just over a decade of dramatic change.

The changes have contributed to reduced postpartum hemorrhage and other conditions that underlie maternal death as well as to reduced newborn hypothermia and asphyxia, reflected in declines in indicators such as early neonatal mortality. The changes also fostered increases in contraceptive use that helped reduce reliance on abortion. Beyond that, JSI has empowered women, families, health care providers and health administrators to take the initiative to improve health services in their communities.

Starting in 1999, with USAID funding, JSI supported the governments of Russia, Ukraine, Georgia and the five Central Asian Republics – Kazakhstan, the Kyrgyz Republic, Tajikistan, Turkmenistan and Uzbekistan – to launch pilot projects to improve maternal and infant care and reduce maternal and infant morbidity and mortality and then roll out successful interventions. A little over a decade later, the region’s maternal and infant health care systems are stronger than before.

This document presents the ways in which improvements were introduced and scaled up, the quantitative impact they have had on the health and survival of mothers and newborns and on health systems, and stories from families and health workers whose lives have been immeasurably enriched by the modern, humane and evidence-based methods of care brought by the projects.