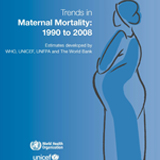 This report highlights the following.

WHO, UNICEF, UNFPA and The World Bank