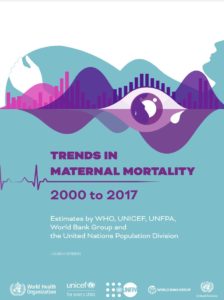 Estimates by WHO, UNICEF, UNFPA, World Bank Group and the UN Population Division

More women and children survive today than ever before. Despite strong progress, however, every 11 seconds, a pregnant woman or newborn dies somewhere in the world – deaths that can be prevented using skilled care before, during and after childbirth.

The latest Trends in Maternal Mortality: 2000 to 2017 report from UNICEF and partners finds that the maternal mortality ratio (MMR, number of maternal deaths per 100,000 live births) dropped by about 38 per cent worldwide. Nonetheless, poverty remains one of the biggest factors in whether or not a woman receives adequate health care, and 94 per cent of all maternal deaths still occur in low- and lower middle-income countries.

Most maternal deaths are preventable as the health care solutions to avoid or manage complications are well-known. Since the health of the mother and newborn are closely linked, access to high quality care before, during and after childbirth can make the difference between life and death for both mother and baby.

The Sustainable Development Goals (SDGs) were launched on 25 September 2015 and came into force on 1 January 2016 for the 15-year period until 31 December 2030. Among the 17 SDGs, the direct health related targets come under SDG 3: Ensure healthy lives and promote well-being for all at all ages. With the adoption of the SDGs, the United Nations Member States extended the global commitments they had made in 2000 to the Millennium Development Goals (MDGs), which covered the period until 2015.

In anticipation of the launch of the SDGs, the World Health Organization (WHO) released a consensus statement and full strategy paper on ending preventable maternal mortality (EPMM). The EPMM target for reducing the global maternal mortality ratio (MMR) by 2030 was adopted as SDG target 3.1: reduce global MMR to less than 70 per 100 000 live births by 2030.

Having targets for mortality reduction is important, but accurate measurement of maternal mortality remains challenging and many deaths still go uncounted. Many countries still lack well functioning civil registration and vital statistics (CRVS) systems, and where such systems do exist, reporting errors – whether incompleteness (unregistered deaths, also known as “missing”) or misclassification of cause of death – continue to pose a major challenge to data accuracy.