Home > Resources > Trends of stillbirth among reproductive-age women in Ethiopia based on Ethiopian demographic and health surveys: a multivariate decomposition analysis 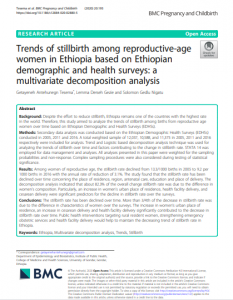 Despite the effort to reduce stillbirth, Ethiopia remains one of the countries with the highest rate in the world. Therefore, this study aimed to analyze the trends of stillbirth among births from reproductive age women over time based on Ethiopian Demographic and Health Surveys (EDHSs).

Secondary data analysis was conducted based on the Ethiopian Demographic Health Surveys (EDHSs) conducted in 2005, 2011 and 2016. A total weighted sample of 12,037, 10,588, and 11,375 in 2005, 2011 and 2016 respectively were included for analysis. Trend and Logistic based decomposition analysis technique was used for analyzing the trends of stillbirth over time and factors contributing to the change in stillbirth rate. STATA 14 was employed for data management and analyses. All analyses presented in this paper were weighted for the sampling probabilities and non-response. Complex sampling procedures were also considered during testing of statistical significance.