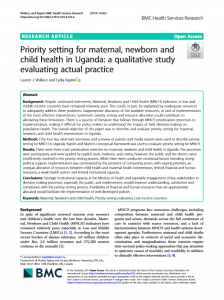 Despite continued investment, Maternal, Newborn and Child Health (MNCH) indicators in low and middle income countries have remained relatively poor. This could, in part, be explained by inadequate resources to adequately address these problems, inappropriate allocation of the available resources, or lack of implementation of the most effective interventions. Systematic priority setting and resource allocation could contribute to alleviating these limitations. There is a paucity of literature that follows through MNCH prioritization processes to implementation, making it difficult for policy makers to understand the impact of their decision-making on population health. The overall objective of this paper was to describe and evaluate priority setting for maternal, newborn and child health interventions in Uganda.

There were three main prioritization exercises for maternal, newborn and child health in Uganda. The processes were participatory and were guided by explicit tools, evidence, and criteria, however, the public and the districts were insufficiently involved in the priority setting process. While there were conducive contextual factors including strong political support, implementation was constrained by the presence of competing actors, with varying priorities, an unequal allocation of resources between child health and maternal health interventions, limited financial and human resources, a weak health system and limited institutional capacity.

Stronger institutional capacity at the Ministry of Health and equitable engagement of key stakeholders in decision-making processes, especially the public, and implementers, would improve understanding, satisfaction and compliance with the priority setting process. Availability of financial and human resources that are appropriately allocated would facilitate the implementation of well-developed policies.