Home > Resources > Unpacking the null: a post-hoc analysis of a cluster-randomised controlled trial of the WHO Safe Childbirth Checklist in Uttar Pradesh, India (BetterBirth) 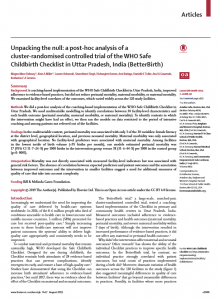 A coaching-based implementation of the WHO Safe Childbirth Checklist in Uttar Pradesh, India, improved adherence to evidence-based practices, but did not reduce perinatal mortality, maternal morbidity, or maternal mortality. We examined facility-level correlates of the outcomes, which varied widely across the 120 study facilities.

We did a post-hoc analysis of the coaching-based implementation of the WHO Safe Childbirth Checklist in Uttar Pradesh. We used multivariable modelling to identify correlations between 30 facility-level characteristics and each health outcome (perinatal mortality, maternal morbidity, or maternal mortality). To identify contexts in which the intervention might have had an effect, we then ran the models on data restricted to the period of intensive coaching and among patients not referred out of the facilities.

Mortality was not directly associated with measured facility-level indicators but was associated with general risk factors. The absence of correlation between expected predictors and patient outcomes and the association between improved outcomes and the intervention in smaller facilities suggest a need for additional measures of quality of care that take into account complexity.