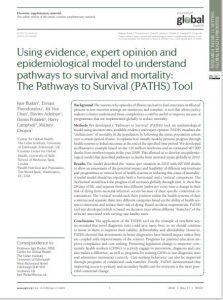 The reasons why episodes of illness can lead to fatal outcomes in affected persons in low resource settings are numerous and complex. A tool that allows policy makers to better understand those complexities could be useful to improve success of programmes that are implemented globally to reduce mortality.

We developed a “Pathways to Survival” (PATHS) tool: an epidemiological model using decision trees, available evidence and expert opinion. PATHS visualises the “architecture” of mortality in the population by following the entire population cohort over a certain period of time. It explains how initially healthy persons progress through health systems to lethal outcomes at the end of the specified time period. We developed an illustrative example based on the 136 million newborns and an estimated 907000 deaths from newborn sepsis in the year 2008. This allowed us to develop an epidemiological model that described pathways to deaths from neonatal sepsis globally in 2010.

The model described the “status quo’ situation in 2010 with 907000 deaths to allow an assessment of the potential impact and feasibility of different interventions and programmes at various level of health systems in reducing this cause of mortality. A useful model should incorporate both a ‘horizontal’ and a ‘vertical’ component. The ‘horizontal’ would track the progress of all neonates globally through time, ie, their first 28 days of life, and separate them into different ‘pathways’ every time a change in their risk of dying from neonatal infection occurs because of their specific contextual circumstances. The ‘vertical’ would track their position within the health systems of their countries and separate them into different categories based on the ability of health system to intervene and reduce their risk of dying. Based on those requirements, PATHS tool was developed which is based on decision trees where different “branches” of the trees are associated with varying case-fatality rates.