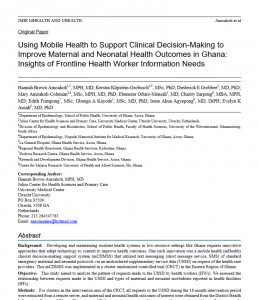 Developing and maintaining resilient health systems in low-resource settings like Ghana requires innovative approaches that adapt technology to context to improve health outcomes. One such innovation was a mobile health (mHealth) clinical decision-making support system (mCDMSS) that utilized text messaging (short message service, SMS) of standard emergency maternal and neonatal protocols via an unstructured supplementary service data (USSD) on request of the health care providers. This mCDMSS was implemented in a cluster randomized controlled trial (CRCT) in the Eastern Region of Ghana.

For clusters in the intervention arm of the CRCT, all requests to the USSD during the 18-month intervention period were extracted from a remote server, and maternal and neonatal health outcomes of interest were obtained from the District Health Information System of Ghana. Chi-square and Fisher exact tests were used to compare the proportion and type of requests made to the USSD by cluster, facility type, and location; whether phones accessing the intervention were shared facility phones or individual-use phones (type-of-phone); or whether protocols were accessed during the day or at night (time-of-day). Trends in requests made were analyzed over three 6-month periods. The relationship between requests made and the number of cases reported in HFs was assessed using Spearman correlation.

There were variations in the pattern of requests made to the mCDMSS over time. Detailed information regarding the use of the mCDMSS provides insight into the information needs of HWs for decision-making and an opportunity to focus support for HW training and ultimately improved maternal and neonatal health.