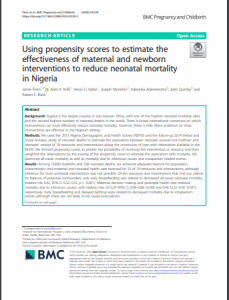 Researchers used the 2013 Nigeria Demographic and Health Survey (NDHS) and the follow-up 2014 Verbal and Social Autopsy study of neonatal deaths to estimate the association between neonatal survival and mothers’ and neonates’ receipt of 18 resources and interventions along the continuum of care with information available in the NDHS. They formed propensity scores to predict the probability of receiving the intervention or resource and then weighted the observations by the inverse of the propensity score to estimate the association with mortality. Researchers then examined all-cause mortality as well as mortality due to infectious causes and intrapartum related events.

Among 19,685 livebirths and 538 neonatal deaths, we achieved adequate balance for population characteristics and maternal and neonatal health care received for 10 of 18 resources and interventions, although inference for most antenatal interventions was not possible. Of ten resources and interventions that met our criteria for balance of potential confounders, only early breastfeeding was related to decreased all-cause neonatal mortality (relative risk 0.42, 95% CI 0.32–0.52, p <  0.001). Maternal decision making and postnatal health care reduced mortality due to infectious causes, with relative risks of 0.29 (95% CI 0.09–0.88; 0.030) and 0.46 (0.22–0.95; 0.037), respectively. Early breastfeeding and delayed bathing were related to decreased mortality due to intrapartum events, although these are not likely to be causal associations.