Home > Resources > “We shall count it as a part of kyogero”: acceptability and considerations for scale up of single dose chlorhexidine for umbilical cord care in Central Uganda 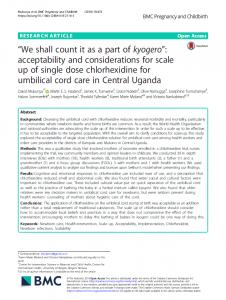 Cleansing the umbilical cord with chlorhexidine reduces neonatal morbidity and mortality, particularly in communities where newborn deaths and home births are common. As a result, the World Health Organization and national authorities are advocating the scale up of this intervention. In order for such a scale up to be effective, it has to be acceptable to the targeted population. With the overall aim to clarify conditions for scale-up, this study explored the acceptability of single dose chlorhexidine solution for umbilical cord care among health workers and infant care providers in the districts of Kampala and Mukono in Central Uganda.

This was a qualitative study that involved mothers of neonates enrolled in a chlorhexidine trial, nurses implementing the trial, key community members and opinion leaders in childcare. We conducted 30 in depth interviews (IDIs) with mothers (18), health workers (8), traditional birth attendants (2), a father (1) and a grandmother (1) and 4 focus group discussions (FGDs), 3 with mothers and 1 with health workers. We used qualitative content analysis to analyze our findings and borrow upon Sekhon’s model when presenting our findings.

Cognitive and emotional responses to chlorhexidine use included ease of use, and a perception that chlorhexidine reduced smell and abdominal colic. We also found that wider social and cultural factors were important to chlorhexidine use. These included cultural value put on quick separation of the umbilical cord as well as the practice of bathing the baby in a herbal mixture called kyogero. We also found that older relatives were key decision makers in umbilical cord care for newborns, but were seldom present during health workers’ counseling of mothers about hygienic care of the cord.

The application of chlorhexidine on the umbilical cord stump at birth was acceptable as an addition rather than a total replacement of traditional substances. The scale up of chlorhexidine should consider how to accommodate local beliefs and practices in a way that does not compromise the effect of the intervention; encouraging mothers to delay the bathing of babies in kyogero could be one way of doing this.