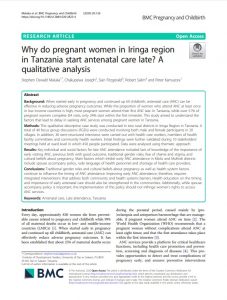 When started early in pregnancy and continued up till childbirth, antenatal care (ANC) can be effective in reducing adverse pregnancy outcomes. While the proportion of women who attend ANC at least once in low income countries is high, most pregnant women attend their first ANC late. In Tanzania, while over 51% of pregnant women complete ≥4 visits, only 24% start within the first trimester. This study aimed to understand the factors that lead to delay in seeking ANC services among pregnant women in Tanzania.

This qualitative descriptive case study was conducted in two rural districts in Iringa Region in Tanzania. A total of 40 focus group discussions (FGDs) were conducted involving both male and female participants in 20 villages. In addition, 36 semi-structured interviews were carried out with health care workers, members of health facility committees and community health workers. Initial findings were further validated during 10 stakeholders’ meetings held at ward level in which 450 people participated. Data were analysed using thematic approach.

Traditional gender roles and cultural beliefs about pregnancy as well as health system factors continue to influence the timing of ANC attendance. Improving early ANC attendance, therefore, requires integrated interventions that address both community and health systems barriers. Health education on the timing and importance of early antenatal care should also be strengthened in the communities. Additionally, while spouse accompany policy is important, the implementation of this policy should not infringe women’s rights to access ANC services.