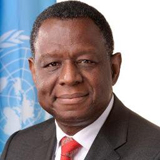 On 1 January 2011, Dr. Babatunde Osotimehin, a physician and public health expert, became only the fourth Executive Director of UNFPA, the United Nations Population Fund. He holds the rank of Under-Secretary-General of the United Nations. Before this appointment, Dr. Osotimehin was Nigeria’s Minister of Health. Prior to that, he was Director-General of Nigeria’s National Agency for the Control of AIDS, which coordinates HIV and AIDS work in a country of more than 160 million people. Dr. Osotimehin qualified as a doctor from the University of Ibadan, Nigeria, in 1972, and went to the University of Birmingham, England, where he got a doctorate in medicine in 1979. He was appointed Professor at the University of Ibadan in 1980 and headed the Department of Clinical Pathology before being elected Provost of the College of Medicine in 1990. Years later, he served in several organizations, including as Chair of the National Action Committee on AIDS, from 2002 to 2007. Dr. Osotimehin received the Nigerian national honour of Officer of the Order of the Niger (OON) in December 2005. At UNFPA, he has introduced major reforms to make the Fund more focused and results-oriented as well as intensified efforts to promote the rights and ability of young people to build a better world in the context of sexual and reproductive health. He is married and has five children.