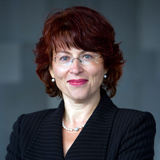 Dr Flavia Bustreo was appointed Assistant Director-General for Family, Women's and Children's Health at the World Health Organization (WHO) on 1 October 2010. At WHO, she served as Deputy Director and then Director of The Partnership for Maternal, Newborn & Child Health from 2006 to 2010. In 2004-2005, she served as Interim Deputy Director of the Child Survival Partnership. Dr Bustreo's work has focused on policy development concerning child and maternal health, policy implementation and partnership-building with a wide range of stakeholders. In 2010, she led the development of the United Nations Global Strategy for Women’s and Children’s Health. In 2008, she contributed to the High Level Taskforce on International Innovative Financing for Health Systems and in 2005, to the UN Taskforce on Millennium Development Goals (MDGs) 4 & 5 to reduce maternal and child mortality. Dr Bustreo has worked in several countries, including assignments for WHO country and regional offices in Bangladesh, Brazil, China, Egypt, India, Morocco, Peru, the Philippines, Senegal, Sudan and Uganda. She has also served at WHO’s EURO office in Copenhagen, headquarters in Geneva, at the World Bank and as a special advisor to the Norwegian Prime Minister's Initiative for MDGs 4 & 5. She has published numerous academic and popular articles in the field of public health, women's and children's health. Dr Bustreo earned a degree in medicine with honours and a postgraduate qualification in rehabilitation medicine from Padua University, Italy, and later obtained a M.Sc. in Communicable Disease Epidemiology from the London School of Hygiene and Tropical Medicine. She has worked as a clinician with children and adolescents with disabilities, and with NGOs working with refugees in the former Yugoslavia and Iraq. Dr Bustreo speaks English, French, Spanish, Portuguese and Italian and has studied Russian and Arabic.