Home > Blog > Babies in the dark

The old lady walks rapidly through the refugee camp outside Cox’s Bazar in southern Bangladesh. Everyone recognises her, many shouting “Hello grandma, what is your news?” She likes to walk fast, just like she likes to talk fast. She stops in front of houses with pregnant women, shouting questions from the street or in the doorway. There are a lot of houses with pregnant women, and Grandma’s job is to help them deliver their babies safely.

Before becoming a refugee, ‘Grandma’ worked as a traditional birth attendant in Myanmar, delivering over 4,000 babies. Here, in the Rohingya refugee camps of southern Bangladesh, she works together with UNFPA, the UN’s sexual and reproductive health agency, visiting pregnant women and new mothers, checking their health and explaining the importance of regular visits to a midwife.

After 8pm all is quiet in the camps

When Grandma goes to sleep, she keeps a burka folded next to her bed. That way she can get up quickly, put the burka on, and head straight out the door, at any time of night. Like a few days ago, when, in the middle of the night, there was a shout and a series of small knocks on her door. 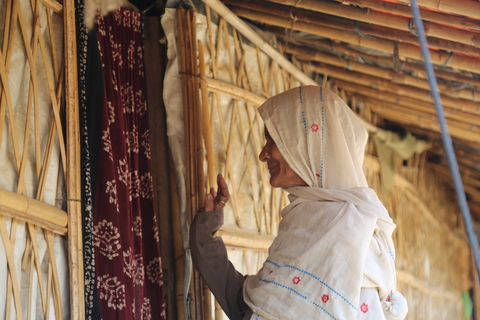 Outside in the dark stood a little girl, seven years old, the daughter of a pregnant woman Grandma knew from recent visits. Grandma immediately pulled on her burka, took the girl’s hand, and together they quickly made their way through the camp.

When Grandma arrived, the girl’s pregnant mother, Fatima, was lying on a thin mat on the ground inside the makeshift hut, crying out in pain. Grandma quickly had to make a decision, they had to get to the UNFPA-supported health facility as quickly as possible. The only problem was, they had no transportation, and it was completely dark outside.

Getting help in the dark

Inside the world’s largest refugee camp almost everyone goes to sleep around 8pm. There is no electricity and only a loose assortment of solar lamps to light up tiny parcels of the camp.

Night time can be a dangerous time to go into labour in the camps. “It is especially challenging to reach birth facilities at night for the Rohingyas in the camps”, says UNFPA Midwifery Specialist, Anne Marie Brennan, “as not only is there insufficient lighting, but some areas are inaccessible by vehicle, and often mobile phones are unable to get any connection.”

Grandma and Fatima set out together in the dark and empty camp, walking very slowly, while looking for a local taxi, a three-wheeled Tom-Tom. After walking for half an hour, supporting each other, and seeing no other living being except street dogs, they still hadn’t found any transport. Then, as dawn started to pour out of the sky in the east, in the direction of Myanmar, they finally saw a Tom-Tom and hailed the driver.

Tom-Tom drivers in the camp know they get paid if they transport a pregnant woman to a UNFPA supported health facility, so the women were immediately driven across bumpy roads to the clinic, and on the last day of March 2019, half an hour after arriving there, a baby girl was delivered safely to Fatima.