Home > Blog > Bereavement Care in the Time of Corona

“There are things you only do for love” (Gabriel García Márquez, Love in the Time of Cholera)

The rapid onset of the COVID-19 pandemic has thrust the importance of care around death and the dying to the front of our collective global consciousness. Daily media reports have highlighted not only the statistics and science behind the pandemic, but more importantly, the moving, real-life stories of those individuals who have died, often in isolation, as a result of the deadly virus.

The sudden grief and desolation that unexpected death can bring, and the importance of sensitive care that loved ones require immediately after it, are themes which have been at the heart of the development of the UK’s  National Bereavement Care Pathway (NBCP) for pregnancy and baby loss. Inconsistency between hospitals in the ways in which families have been historically cared for in the UK led to the creation of the All-Party Parliamentary Group on Baby Loss in 2016. As a result of its work, and supported by the UK Government’s Department of Health & Social Care, the NBCP began in 2017 with the primary objective of improving the quality and consistency of bereavement care. As it turns out, the foundations laid by the project in 2017 are now providing resilience and structure to the health sector’s response to bereaved families during the pandemic.

In late 2017, Sands and its project partners, alongside representative parent groups, released five “pathways” (clear guidance explaining steps healthcare professionals should take to provide elements of care), on miscarriage, termination of pregnancy for fetal anomaly (TOPFA), stillbirth, neonatal death and sudden unexpected death in infancy (SUDI). These resources were piloted in 11 hospital sites spread across England, with a further 21 added in 2018. In May 2019, the final independent evaluation report highlighted the huge progress made against the project objectives of impact and effectiveness, with improvements validated by parents and professionals.

Given the success of the pilot, the Government agreed that the roll-out programme for England should begin immediately afterwards, and a further 34 sites have subsequently joined up. This means that around 50% of England sites have now adopted the NBCP, covering all five individual pathways. A parallel project in Scotland is also currently being piloted by five hospital boards ahead of a planned national roll-out.

Ensuring that there is:

More recently, at Sands we have adjusted the focus of our work to specifically support Healthcare professionals (HCPs) during the COVID-19 crisis.

To that end, we have provided specific, COVID-19 related updated advice and guidance on our Sands and NBCP webpages in England and Scotland, collating information from a number of Royal Colleges and other national leaders, in order to help healthcare professionals care more effectively for parents, including after a death.

We have also adapted our face-to-face training on the NBCP to online webinars, and these complement the NBCP e-learning modules on bereavement care created in 2019.

Despite the unprecedented times in which we are living, our focus remains to save babies’ lives, provide support to bereaved families, and to help healthcare professionals provide effective care for those whose baby has died.

With families separated and grieving individuals isolated by the pandemic, it’s more crucial than ever that we all remain focused on supporting the best possible Bereavement Care in the Time of Corona.

Marc is a member of the Stillbirth Advocacy Working Group which was founded by the Partnership for Maternal, Newborn and Child Health, and is co-chaired by the International Stillbirth Alliance and the London School of Hygiene & Tropical Medicine. Email co-chairs Hannah Blencowe or Susannah Leisher at hannah-jayne.blencowe@lshtm.ac.ukor shleisher@aol.com to learn more, or contact ISA here to express your interest. 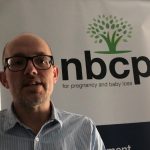 Marc Harder is the UK Lead for the National Bereavement Care Pathway at Sands, a stillbirth and neonatal death charity. Marc has been with Sands since 2017, following a career in the private and public sectors as a project manager in children’s services and other service areas. His drive is for improved outcomes for families through collaboration.